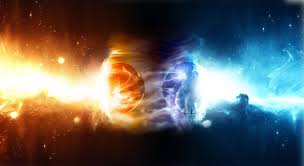 In the person of Jesus Christ, two worlds met.  One was the visible world populated by men and women, boys and girls, animals and minerals.  It was an old and tired world – worn down from millennia of suffering and pain.  It was a world that was in desperate need of hope, or a hand to lift it up once again.  It seemed, to those who were looking, as if it were the older of the two worlds, but it wasn’t.  The other world was populated by God and Satan, angels and demons, principalities and powers.  And contrary to popular opinion, it was by far the older of the two worlds.  Yet it, too, had been waiting.  It, too, had been agonizing over the fallenness of the visible world of humans.

But at the manger, the two worlds met in the Person of Jesus.  All the promises of the Old Testament, beginning in the garden of Eden, found their “Yes” and “Amen!” in the New Testament and the Incarnation.  And after so long of a wait, as Michael Card put it in Immanuel – Reflections on the Life of Christ – “It was good news to finally be able to embrace the Promised One.  But far and away the best news of all is that He embraces us.  That was the reason for His coming.  Most of us describe our coming to faith by saying, ‘I’ve asked Jesus into my life.’  We should really say He has invited us into His life.

“That was the reason for Simeon’s song.  Deep inside his tired old heart, he knew that the infant he held in his arms was in truth the One who had been holding him all his life long.”

As you run head-long into this holiday season, how is your world intersecting with Christianity?  Do their paths cross in visible ways, or are you trying to keep your faith hidden from sight?  The two worlds meet in each of us who are disciples.  Which one will you show to the world this Christmas?

Luke 5:32 (NLT) – I have come to call sinners to turn from their sins, not to spend my time with those who think they are already good enough.

PRAYER: Thank you, God, for caring about us!  In Jesus’ name, Amen.