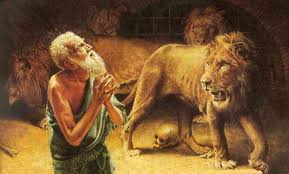 Do you remember when you were first trying to learn to walk? I don’t either, but I suspect our parents started us down the path to walking by helping us learn to stand up first. It’s a combination, I guess, of figuring out the crawling thing first, watching people walk, and standing on your own two legs.

There are times when standing up isn’t easy. I’ve been on the deck of a boat out on the ocean where the oncoming swells were up above my head. It wasn’t easy to stand at all (let alone keep my breakfast down!) There are other times when I was coming out of anesthesia and walking, at least in a straight line, was rather a challenge. I would imagine that in both those situations I appeared a bit comical (except maybe for throwing up over the boat railing)!

Spiritually, it isn’t easy to always stand up either. The sermon on Sunday was about Daniel chapter 6, where Daniel, who must have been around 80 years old at the time, was made one of the top three rulers in the Medo-Persian empire, and was about to be made the top guy after the king himself, when some of the other satraps and rulers grew jealous of him and set out to try to destroy him. They tricked the king into issuing a decree that no one could pray to anyone except to the king himself for the next 30 days. You see, they knew Daniel’s habit of prayer and unable to find any other fault in him, the had the king pass that self-honoring law.

Daniel didn’t forsake his prayer habit, even though he could have gone into his closet and prayed in the dark, or just “prayed in his heart” for 30 days. He stood a stand for what his conscience told him he needed to do. And how did he take that stand? By kneeling down three times a day to pray toward Jerusalem.

What would I have done? Do I even pray three times a day? Do you? What if I’d been faced with a life or death choice – stop praying or die? How important is prayer to me? Or rather, how important is my relationship with my God?

If someone offered all Christians $5,000,000 to stop praying for 30 days, my guess is that there would a many, many more Christian multi-millionaires. We could justify (or at least rationalize it) in a variety of ways. “Think of all the good I could do for others with that money…and God would be glorified!”

And he stood by kneeling down.

Sometimes the only way to stand is to get down on our knees and then do what we know will bring God glory, not what will bring us honor or glory.

PRAYER: Father, give us the courage to take a stand for You and Your honor and glory! May our knees grown calloused from prayer, for there is great need and penitence to be made for all the times we’ve refused to stand. In Jesus’ name, Amen.