As some of you know, photography has become one of my hobbies.  There’s not much that I enjoy more than getting off to some place that is pretty or interesting or which has wild animals and taking pictures of them.  I can’t say that I’m much good at it – but I hope to get better and I’m reading things to help me learn.

I was recently able to spend part of a day in Yosemite where there was snow on the ground – not a lot of it, but enough to make the place even more magical than it already is.  There is a challenge to taking good pictures in the snow.  The color white reflects back 36% of the light waves that hit it.  Camera light meters, however, have a real problem with white.  They see white and rather than seeing all of it, they see only 18% (half) of the light waves bouncing off a white surface.  As a result, cameras, left to automatic exposure, will typically render white snow as a dingy gray.

As I struggled a bit to get good exposures in Yosemite in the snow, I got to thinking about how the Bible says white is symbolic of purity and black is representative of sin.  We would like to think that we’re “white” spiritually.  This is never clearer than in the case of those who think that they’re “pretty good people” who don’t smoke, drink or cheat.  They think they are good enough through their own efforts.  But just like the camera has a problem with recognizing whiteness, so our inner eyes often struggle to see our own dingy grayness and instead we choose to think we see purity when it is in fact lacking.  We make the problems we may have (even sin problems) someone else’s fault: they provoked me to anger, they cheated me so I’m justified in talking about them behind their back, or she wore too short of a skirt and made me lust.

The best any of us are on our own is like the blackest black you can imagine.  It’s what the prophet was saying when he said, “All our righteous deeds are as filthy rags” (Isa. 64:6).  They aren’t even gray – they’re filthy black!

Then, in steps Jesus, armed with the ability and knowledge to turn us white once again.  Just as a photographic exposure can be adjusted to make the white more “white”, Jesus can take our sin-stained souls and brighten them up so that we will “shine like stars in the universe” (Phil. 2:15).

The eye of the camera is fooled by whiteness…and we can let our spiritual eyes be fooled, too.

PRAYER: Jesus, thank you for cleaning us up and making us shine!  In Jesus’ name, Amen. 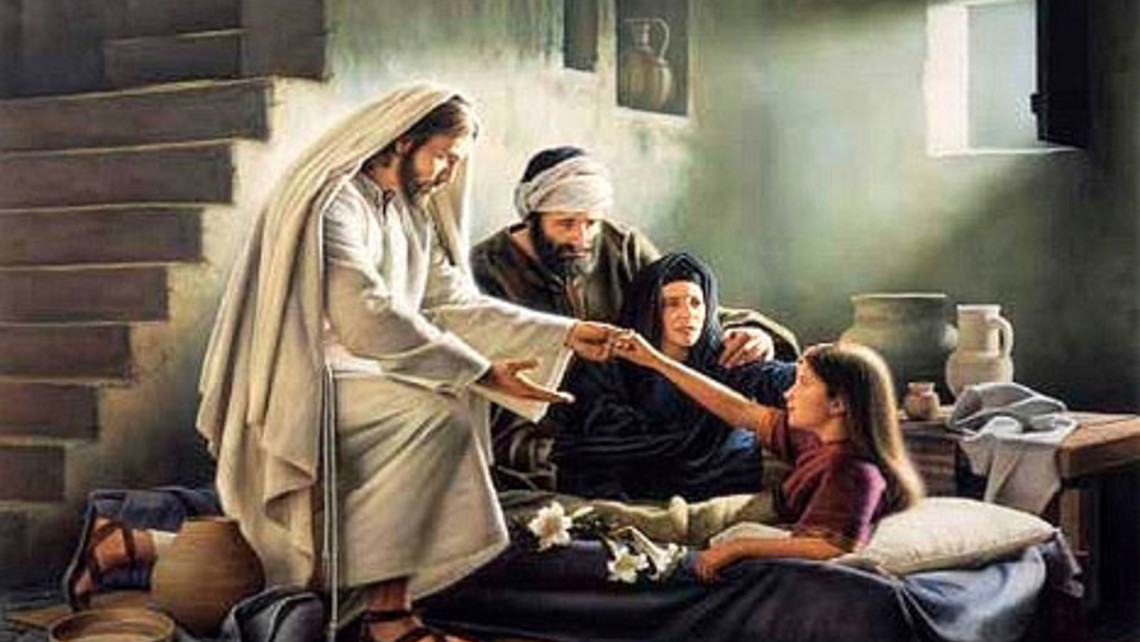 On 12/19/19, Craig Keener wrote on the theology blog of Christianity Today about two events, closely linked in the text of Mark and in purpose, in the life of Jesus. The first, the healing of the woman with the issue of blood and the second, the raising of Jairus’ daughter from the dead. He made the following observations:

“So far as we can tell from Mark, Jesus has not yet raised anyone else from the dead. Jesus thus demands from Jairus greater faith, and he accordingly continues with Jesus to the house. Faith does not mean that Jairus will not join others’ astonishment when his daughter is raised (5:42).

“Jesus had physical contact with ritual impurity when healing a leper (1:41) and the bleeding woman. But whereas such contacts rendered one impure until evening, touching a corpse rendered one impure for a week (Num. 19:11–13). Jesus, however, embraces us in our need, which takes priority over ritual purity (Mark 7:1–23) and even the Sabbath (2:23–3:6). He takes the dead girl by the hand and raises her up (5:41).”

As we enter the week where we celebrate Jesus’ birth, let’s remember that he didn’t come so we could sing nice carols, decorate trees and houses and exchange presents with one another. He came to take on our uncleanness and raise us up to wholeness and purity.

As we celebrate our rituals, let’s remember that He was willing to become unclean to make us “well”. Meeting our need was more important to him than any ritual. It should be that way for us as well.

PRAYER: Jesus, there simply aren’t words that express our amazement that you were born to take on our sin and raise us up. We are forever thankful for your birth, your life, your death and resurrection. In Jesus’ name, Amen.

From the DayBreaks archives, June 2009:

Matthew 5:8: Blessed are the pure in heart, for they will see God.

Have you ever wanted to see God? Have your ever thought that if you could just see Him for a moment that it would be easier to believe and obey? It might be for a short while, but probably not in the long run. There were many who saw and heard him but didn’t believe. But seeing isn’t believing.

In the sermon on the mount, Jesus utters the words found in Matthew 5:8. What is the connection between being pure in heart and seeing God? What is the message Jesus wants us to understand?

FIRST: I’m glad that Jesus said “pure in heart” and didn’t insist it was only those who were pure in deed that would see God. In my heart I want to do what is right, in my flesh I find it harder to live out. While what is in our hearts should find expression in the outcome of our actions, there is sometimes a disconnect. God judges the heart (1 Sam. 16:7).

SECOND: A French writer, Francois Mauriac, had an interesting insight. He concluded that self-discipline, repression of desires and logical and rational arguments are not sufficient weapons to use in fighting our impulses to sin. And that has been my experience, too. No matter how hard I try to discipline myself, I yield to temptation. Mauriac ultimately concluded that there was only one good reason to be pure, and that is what Jesus was saying in this verse. As Mauriac put it, “Impurity separates us from God. The spiritual life obeys laws as verifiable as those of the physical world…Purity is the condition for a higher love – for a possession superior to all possessions: that of God. Yes, that is what is at stake, and nothing else.”

This was the meaning of the parable of the pearl of great price: there is nothing (no earthly pleasure or heavenly delight) that can compare to possessing God Himself and having Him as your own. The desire to “have” God and to be His, to see His face, is the only motivation that can overcome the impurity of our hearts and make us pure enough to be able to see His face.

Why is it that the pure in heart can see God? Because it is simply the condition to be in His presence.  The point is clear: do you want to see God? Be pure in heart…singularly devoted to Him, seeking Him and His way and will above all other ways and wills…even your own!

Prayer: Cleanse our hearts and make them fully devoted to You!  In Jesus’ name, Amen.