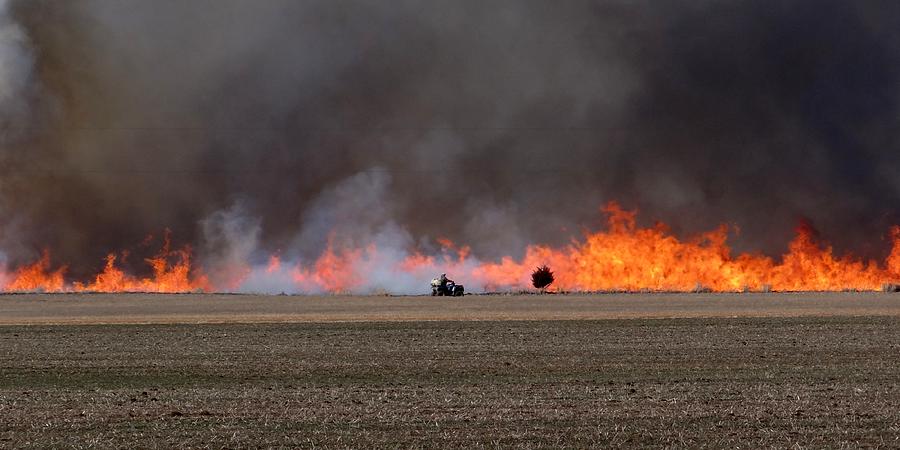 From the DayBreaks archive, August 2008:

One of the great threats in California this year (and almost every year) has been wild fires.  Surely, you’ve heard or read stories about it in the news.  There was a strange night of lightning storms that swept California a while back, and over 800 fires were running amok around the state.  Even to this date, some are still burning.

Wild fires are nothing new.  Back in the days of the pioneers, there were times when the owners of a log hut would look contentedly out over the miles and miles of swaying, tall grass when they would catch a glimpse of a dark cloud out on the far distant horizon.  As they watched it over a period of time, they could see that behind the apparent cloud was a fierce, fiery glare.  Although it was still a long way off, there could be no doubt about what it was – the prairie is on fire and the winds were driving it straight toward the settlers.

Driven by the wind, the fire would approach at speeds of fifteen miles per hour or more.  What could they possibly do to stop it?  Nothing, absolutely nothing.  There were no flying bombers that could drop tons of flame retardant chemicals, no helicopters that could chopper off to the nearest water hole and fill a huge bucket with water that could be dropped on the fire.  It was true that wise pioneers build a firebreak around their little settlements, but such fire breaks were only effective for an ordinary grass fire, but not for any kind of safety from a massive wild fire sweeping across miles and miles of grassy plain.

Men and animals with terror–stricken eyes would flee from the onrushing cataclysm for their lives.  No time for thinking was left.  What can be done?  Was there to be no escape, no deliverance?  Would all inevitably perish?

There was one—and only one—hope of escape.  What is it?  How is it accomplished?  It involved the very element (fire) that was pursuing them and threatening them!  If the pioneers struck a match and lit the grass at their feet, the new fire, blown by the wind, would move ahead of them as if fleeing from the oncoming torment itself.  This new fire would burn the prairie ahead of the fleeing pioneers, consuming all before it, leaving the ground, blackened and bare.  As soon as a patch of the prairie was burned, the men and animals could then pass onto the scorched ground into a zone of safety.  Why were they safe?  Because there was nothing left to consume!  The fire started by the pioneers had already burned over the place once, leaving nothing for the approaching flames to burn when they arrived!  The pioneers were then safe and secure from the devouring fire which now raged around them but which could not touch them itself!

Because of our sins, the fires of hell sweep towards us, seeking to consume and burn us until we are dead.  But, as believers, we can do something about it: we can so burn the knowledge of the Word of God into our lives that the flames of the outside world and hell itself will have no influence!

PRAYER: Thank You for the Word, the Life, that has prepared a safe place for us where we can be secure from the fire to come!  In Jesus’ name, Amen.