Luke 10:38-42 (CSBBible) – While they were traveling, he entered a village, and a woman named Martha welcomed him into her home. She had a sister named Mary, who also sat at the Lord’s feet and was listening to what he said. But Martha was distracted by her many tasks, and she came up and asked, “Lord, don’t you care that my sister has left me to serve alone? So tell her to give me a hand.” The Lord answered her, “Martha, Martha, you are worried and upset about many things, but one thing is necessary. Mary has made the right choice, and it will not be taken away from her.”

Poor Martha. She was doing what she could to serve her honored guest. She was working hard to serve him. But she missed the point, much like me.

What was the one thing that was necessary? In the final analysis it wasn’t serving Jesus. It was letting Jesus serve her needs. It is why Jesus said he came (Mt. 10:45).

It is easy to understand Martha’s position. Who wouldn’t want to serve God if he showed up at your doorstep? The point is that Jesus came there not to be served, but to serve them.

A teacher serves by teaching his students. Jesus was serving by teaching – and Mary understood that was what she needed, in fact, it is what we all need.

Are you so busy serving Jesus that you’re not letting him serve you through his Spirit, his Word, his family and worship? Let’s take a lesson from Martha and let Jesus serve us.

PRAYER: Forgive our frantic rushings-about and let us receive the fulness of what you came to give to us. In Jesus’ name, Amen.

John 11:38-40 (ESV) – Then Jesus, deeply moved again, came to the tomb. It was a cave, and a stone lay against it. Jesus said, “Take away the stone.” Martha, the sister of the dead man, said to him, “Lord, by this time there will be an odor, for he has been dead four days.” Jesus said to her, “Did I not tell you that if you believed you would see the glory of God?”

Martha was very much like me, or rather, I am very much like Martha. She was a woman of practicalities. When Jesus comes to dinner, it is Martha who is busy with the cooking and preparations while her sister sits at Jesus’ feet and listens to the teaching of the Master.

Here, in this passage, Martha is worried about something else. She is worried about the stench emanating from her dead brother’s corpse. Quite frankly, I would be worried about it, too, if I had been Martha or if I were in a parallel situation with Jesus. I have not smelled a decomposing human after four days, but I am told it is an unforgettable, sickening odor. Jesus, of course, knew about the stench. For some inexplicable reason, I’d always assumed that when the stone was rolled back and Lazarus came forth, it was as if Jesus had sprayed some heavenly Lysol in the air and there was no stench. But the Scripture doesn’t say that when the stone was moved away that there wasn’t a stench that was released from the enclosed space where Lazarus had been decomposing.

Martha, I’m sure, thought Jesus just wanted to cast one more glance on the face of her dead brother and was trying to let him know that not only wouldn’t it be a pretty sight, it wouldn’t be a pretty smell, either. She was a practical woman – she wasn’t expecting an entirely impractical resurrection. It just isn’t practical to let oneself hope for a resurrection. Such things don’t happen, so don’t even start to get your hopes up.

God, however, isn’t concerned with such trivialities as what is practical and what isn’t. For him, there is no impractical or impossible thing. Everything serves his purpose. Jesus is the God of the practical and impractical. Perhaps it is only my lack of faith that prevents me from seeing more impractical things become reality in my own life.

I am grateful that Jesus loves even practical people like Martha – and me!

PRAYER: Lord, I believe you can do anything you choose to do. Yet I know my practicality often leads me to not even expect things from you, rather than to expect amazing things when you are “on the scene”. Keep me from being so impractical that I don’t believe you can do far more than we can ask or even imagine! In Jesus’ name, Amen. 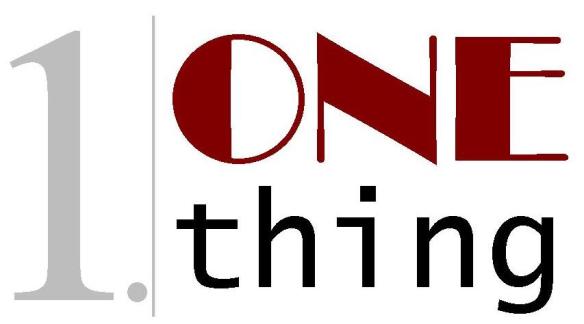 Mark 10:21 (NLT) – 21 Looking at the man, Jesus felt genuine love for him. “There is still one thing you haven’t done,” he told him. “Go and sell all your possessions and give the money to the poor, and you will have treasure in heaven. Then come, follow me.”

Luke 10:41-42 (NLT) – 41 But the Lord said to her, “My dear Martha, you are worried and upset over all these details! 42 There is only one thing worth being concerned about. Mary has discovered it, and it will not be taken away from her.”

Psalm 27:4 (NLT) – 4 The one thing I ask of the LORD— the thing I seek most— is to live in the house of the LORD all the days of my life, delighting in the LORD’s perfections and meditating in his Temple.

These three verses all have one thing in common.  They talk about the importance of “one thing”.  With the rich young man, it was one thing that was standing between himself and the Lord he professed to love and want to serve.  In the second case, Martha was worried about many things, but Jesus tells her that there is just one thing that deserves our concern.  In the last case, David speaks of the one thing he desired – and I think it was the one thing that Martha and the young man both wanted deep inside.

Let your mind consider this question: if Jesus were to speak to you directly, what one thing would he point out to you that is lacking in your life?  Would it be money?  No – echo his words to Martha and the rich man.  Would it be more time?  No – we have all been given all the time we need – it’s just a question of how we use what we’ve been given.

I suspect that the one thing for all of us would have to do with our relationship with him.  We may need more passion for the things of the Lord.  And that, my friends, includes all of us!

PRAYER: Spirit, reveal to us the one thing that You want us to know right now about who we are, what we do, what we need to change…and give us the passion to want that for ourselves as much as You want it for us!  In Jesus’ name, Amen.

To subscribe to DayBreaks, use this link: https://daybreaksdevotions.wordpress.com and click on the Subscribe button at the right of the page.  If you wish to unsubscribe, at the bottom of each email you receive about DayBreaks, you should find an “Unsubscribe” ink at the bottom of the email.