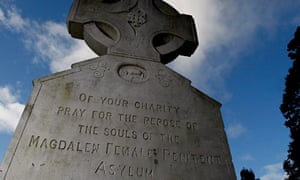 From the DayBreaks archive, January 2009:

“A film made in 2002, The Magdalene Sisters, told the sad story of the “maggies” of Ireland. They got that nickname from Mary Magdalene, a revealing story in itself. The gospels mention only one fact of Mary Magdalene’s past, that Jesus had driven seven demons from her. Nevertheless, a tradition grew that Mary Magdalene must have been the same woman as the prostitute who washed Jesus’ feet with her hair. Hence when a strict order of nuns agreed to take in young women who had become pregnant out of wedlock, they labeled the fallen girls “maggies.”

“The maggies came to public attention in the 1990s when the order sold its convent, bringing to light the existence of the graves of 133 maggies who had spent their lives working as virtual slaves in the convent laundry. The media soon scouted out a dozen such “Magdalen laundries” across Ireland—the last one closed in 1996—and soon relatives and survivors were spilling accounts of the slave-labor conditions inside. Thousands of young women spent time in the laundries, some put away just for being “temptresses,” forced to work unpaid and in silence as a form of atonement for their sins. The nuns took away illegitimate children born to these women to be raised in other religious institutions.

“A public outcry erupted, and eventually campaigners raised money for a memorial, a bench in St. Stephen’s Green, a park in downtown Dublin. I determined to visit the memorial on a trip to Ireland. It was a typical gray day in Dublin, with a sharp September wind and the threat of rain in the air. I asked a policeman and a park guide about the memorial to the maggies, and they both looked at me quizzically. “Dunno that one. Sorry.”

“One by one, my wife and I examined the bronze statues and impressive fountains, mostly honoring fighters for Irish independence. Only by accident did we stumble across a modest bench beside a magnolia tree. A couple was sitting on it, but behind their backs we could see brass-colored lettering. We asked if they would mind moving aside for a moment so we could read the inscription. The plaque reads, “To the women who worked in the Magdalen laundry institutions and to the children born to some members of those communities—reflect here upon their lives.”

“Walking away from the humble memorial, I found myself reflecting not simply on their lives but also on the sharp contrast between how Jesus treated moral failures and how we his followers often do. Jesus appointed the Samaritan woman as his first missionary. He defended the woman who anointed him with expensive perfume: “Wherever the gospel is preached throughout the world, what she has done will also be told, in memory of her.” And Mary Magdalene, she of the seven demons, he honored as the very first witness of the Resurrection—a testimony at first discounted by his more prestigious followers. Where we shame, he elevates.”  – Philip Yancey, Christianity Today, 5/1/2003

Prayer:  May we learn from Your grace and be imitators of Your mercy!  In Jesus’ name, Amen.