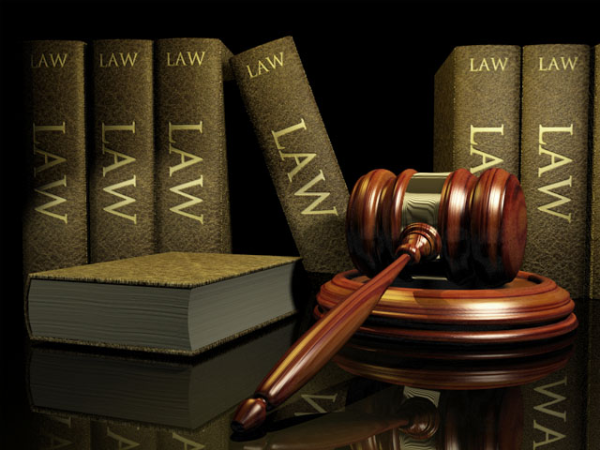 In a cartoon, Frank and Ernest are standing in front of row after row of shelves of books. On top of one of the shelves is a sign, which reads, “Law Library.” Franks turns and says to Ernest: “It’s frightening when you think that we started out with just Ten Commandments.”

It is sort of frightening isn’t it? We started out with 10 and now we have an estimated 35 million laws on the books in the United States alone. Some of them are very good and deeply needed. But there are some that probably need to be repealed.

For example: Did you know there is a law in Florida that makes it illegal for a woman who’s single, divorced or widowed to parachute out of a plane on Sunday afternoon?

In Amarillo, Texas, it is against the law to take a bath on the main street during banking hours. (Apparently it’s OK at other times!)

In Portland, Oregon, it is illegal to wear roller skates in public restrooms.

In Halethorpe, Maryland, a kiss lasting more than a second is an illegal act.

And in St. Louis, there used to be a law that if your automobile spooked a horse, you had to hide the car. And if hiding didn’t work, you had to start dismantling it until the horse calmed down.

As humans, we have a love/hate relationship with laws. We love the laws that protect us, but disdain laws we don’t like. Why do we have 35 million laws on the books in the US? I think there’s part of us that craves rules because they tell us what we can and can’t do. But I think we like them more because they tell us what’s off limits – and we interpret that t mean we can do anything right up to crossing that line. We assume if there’s not a specific law against something, we can do it, so we push the limit. But here’s the problem with the The Greatest Commandment: it would undo all that fallacious reasoning if we take it to heart and love God more than anything else in the world. THAT would truly change our behavior.

PRAYER: Lord, I don’t know if we know how to love you with all our heart, soul, mind and strength. Forgive us for the times we push the limits assuming if something isn’t forbidden then it is permitted – even though we know it would not be your choice for us. In Jesus’ name, men.

When there is something wrong with our bodies, often the doctor will prescribe some medicine: “Take two tablets and call me in the morning.” But what of spiritual sickness? Where can a nation, or even a person, go to find moral and ethical grounding? What is the basis for determining what is right and good?

Some would say that we can rely on public opinion – but think about that for a moment. How fickle is public opinion? It changes nearly every time someone posts something on social media or gets vocal enough that they get on the news about this cause or that cause. And people immediately leap onto the bandwagon until someone else comes along who is equally loud but espousing a different viewpoint. Allegiances and opinions change quickly.

Perhaps, some might suggest, we should trust our courts or legislators. ‘Nuff said about that!!! I think I’d rather trust a hungry crocodile than most legislators to decide what is good and right.

Let me suggest something a bit firmer than public opinion or court rulings. Do you remember something called the 10 Commandments?

They were written on two tablets made of stone (which suggests permanency, and I would suggest that if a nation or some individual is morally sick, they just need to take those two tablets to heart and they’ll soon feel better!

You might object that the old law was done away. Well, you’d be partly right. The ceremonial part was obliterated as there was no more need for the washings or slaughtering of animals after the Lamb’s blood cleansed us. But the moral part never has changed. Jesus himself said that he didn’t come to destroy the old law, but to fulfill it. He also said that not even one tiny dot of it would pass away. That means the moral part is as valid today as it ever was. It is still wrong to use God’s name in vain, or have idols, to give anything priority over God, or steal or murder or lie or commit adultery or envy. When Jesus claimed that if we kept the two greatest commandments that we have kept the entirety of the law, he essentially was breaking the 10 Commandments down into 2: the part that had to do with proper relationship toward God and the part that had to do with the relationship with other humans. Interestingly, all of the 10 Commandments deal with those two things!

The tablets on which the 10 Commandments were written were intended to be good medicine for us. Stuggling with your moral bearings? Take two tablets and call God in the morning!

PRAYER: Lord, let us be grounded in moral and ethical righteousness by paying attention to your immutable Word and law that never changes – because you never change! In Jesus’ name, Amen.

I remember what it was like working in the business world.  I loved the people I worked with, but I must say that I never enjoyed that work as much as what I now do.  I recall how I’d be given an assignment by the VP that I reported to and it would seem to be an impossible request.  And, if the truth be told, at times it was.  You just couldn’t get there from here.  Yet, there was an expectation on his part that somehow, like pulling a rabbit out of a hat, what it was that he desired would magically appear.  Sometimes it happened (by God’s goodness!), but at other times, the rabbit was stillborn.

Expectations.  Instructions.  They can be crushing, can’t they?  If you work or have ever worked, or even if you haven’t, you have had expectations placed upon you that at times were easy to live up to, and at other times were like a 10,000 pound load of bricks.  Such things weigh heavily on our minds, bodies and souls.

Enter a young rabbi from Nazareth.  One day, after his teaching had been rejected at Korazin, Bethsaida and Capernaum, Jesus pronounced a woe on those cities for their failure to turn from their sin to the sinless God.  It wasn’t a pretty scene.  But then comes one of the best known of Jesus’ statements: Matthew 11:28-30 (NLT) – Then Jesus said, “Come to me, all of you who are weary and carry heavy burdens, and I will give you rest.  Take my yoke upon you. Let me teach you, because I am humble and gentle, and you will find rest for your souls.  For my yoke fits perfectly, and the burden I give you is light.”

What is the yoke that Jesus is describing?  In the Jewish culture, every rabbi had what was referred to as a “yoke of teaching.”  Simply put, a rabbi’s yoke was their teachings, his instructions.  Jesus was saying that his instructions were easy, that as opposed to the teachings of the other rabbis (especially the Pharisees with their emphasis on rules and obedience), his teachings were light. His burden was one that could be carried!

I fear that many churches have not been teaching the yoke of this Rabbi.  We make it far too hard for people to enter the kingdom.  In Matthew 23:13 Jesus takes the Pharisees to task specifically for not allowing their students to enter the kingdom.  Their concept of admittance to the kingdom was based on people being good enough to qualify, to earn God’s favor.  That is NOT the message of Jesus Christ!  This perverted view of what Christianity is about has kept many men and women from the kingdom.  And the curses that Jesus pronounced on the Pharisees for laying that heavy yoke on those who sought rest will fall today on those who likewise raise barriers to admittance to the kingdom of God.

Jesus said his yoke of teaching was light, that it fits perfectly.  It doesn’t rub or chafe, resulting in ulcerated, bleeding sores.  It is comfortable, barely noticeable.  His teaching was summarized in two commandments and a statement: Love God, love your fellow man.  Believe in me and my work on your behalf.  That’s it.  He offers a relationship, not rules.  He offered grace, not impossibilities.

Are you trying to carry a back-breaking burden of teaching and rules?  Lay it down.  Pick up the yoke that Jesus would give you.  And stop bleeding.

PRAYER:  We are so grateful, Jesus, that you know and understand our weak frame.  You know that we could never carry the burden of holiness on our own shoulders, nor reach a level of obedience that would qualify us for Heaven.  Thank you for a light burden that is a perfect fit.  May we lay down the heavy load and take up the light yoke of Your teaching.  In Jesus’ name, Amen.

For the wages of sin is death, but the free gift of God is eternal life through Christ Jesus our Lord. – Romans 6:23

We would like to delude and comfort ourselves by thinking that God’s laws are all just like the law of the stop sign, and not like the law of fire.  They’re not.  We think that we may just bruise ourselves a bit when we violate one of His laws, but Romans 6:23 says it’s a far more serious thing to violate His law and put our hand into the fire of sin: the result of that is death.  And that’s a lot more serious than a bruise or two.

PRAYER: Father, give us the gift of discernment and wisdom to grasp the seriousness of our sin.  In Jesus’ name, Amen.