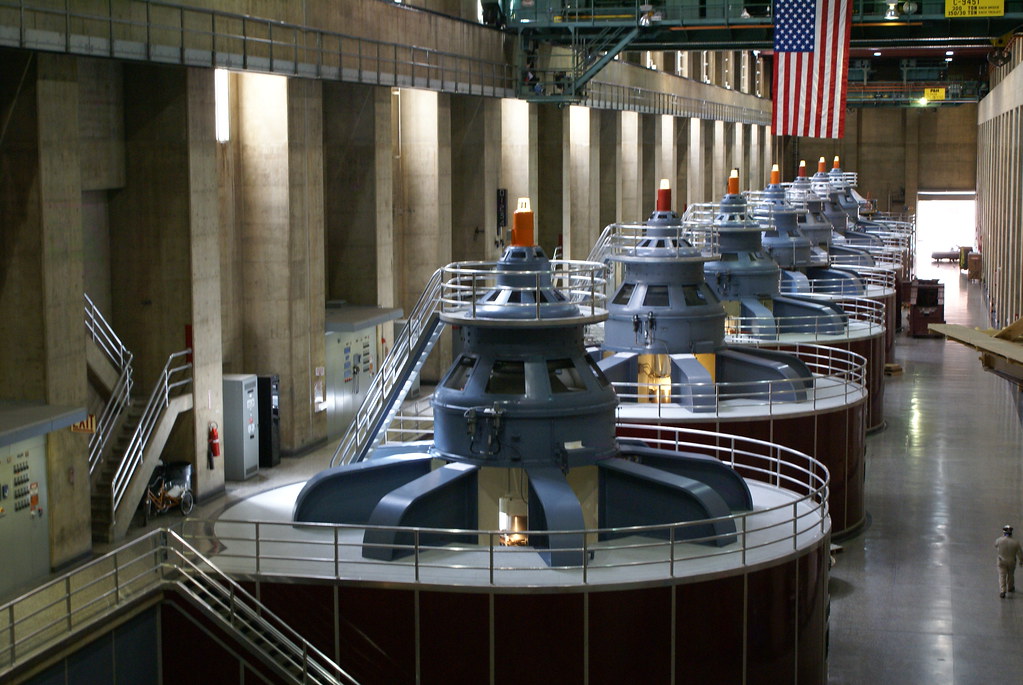 Generators inside Hoover Dam. See the tiny human to the lower right.

From the DayBreaks archive, December 2008:

I am fascinated by power – not political or positional power, but energy. I’ve never been to Niagara Falls but only seen it from flying overhead. I’ve been told by those who’ve been there that the power of the water rushing over the falls is awesome. Hoover Dam houses 17 generators that are over 70 feet tall weighing over 2000 tons each. It takes about three years to assemble each generator. The moving part of each generator weighs over 800 tons and spins 3 times per second (180 times a minute!) Together, they generate over 2000 megawatts of energy (unless my math is wrong, that’s 2 billion watts). Pretty heady stuff. But it’s nothing compared to what’s being built just over the hill from us at Lawrence Livermore National Laboratory. It’s call the National Ignition Facility (NIF) and will be by far the most powerful laser in the world. Actually, it will be composed of 192 lasers when completed. Get this: the NIF will be able to generate 500 TRILLION watts of energy, a figure that is 100 times the total US generating capacity as of today. But there’s a tiny catch…that level of power will only be sustainable for 4 billionths of a second.

Here’s a story about another kind of power: “Christian Herter was the governor of Massachusetts, running for a second term in office. After a busy morning kissing babies and chasing votes, he arrived at a church BBQ in his honor. Late in the afternoon, he was famished. Moving down the serving line, he held out his plate to the woman serving chicken. She put a piece on his plate and turned to the next person. “Excuse me,” Governor Herter said, “do you mind if I have another piece of chicken?” “Sorry,” the woman told him. “I’m supposed to give one piece of chicken to each person.” “But I’m starved,” the governor said. “Sorry,” the woman said again. “Only one per customer.” Governor Herter, a modest/unassuming man, decide that this time he’d throw his weight around a little. “Do you know who I am?” he said. “I’m the governor of this state.” “Do you know who I am?” the woman said. “I’m the lady in charge of the chicken. Move along, mister.”

This lady had power and authority because she knew who she was and what she was supposed to do. Have you ever thought about what the world would be like if we Christians ever really understood WHO and WHAT we are in Christ?! If we ever grasp the truth of our sonship/daughtership – look out world! In Titus 2:15 Paul encourages Titus to teach, encourage and rebuke with all authority and not to let anyone despise us. We need to be courageous and take a stand and refuse to be despised! Then, 2 Tim. 1:7 says God’s Spirit doesn’t make cowards out of us. The Spirit gives us power, love and self-control. Do you live like you believe that?

When Satan comes through life’s serving line and wants things from us – let’s agree to tell him to “move along, mister!” We don’t have to take (or give) anything to him! Live in the power of the Spirit in 2019!

PRAYER: Father, may we come to appreciate and realize who we are, and what we are becoming, in Christ!  In Jesus’ name, Amen.