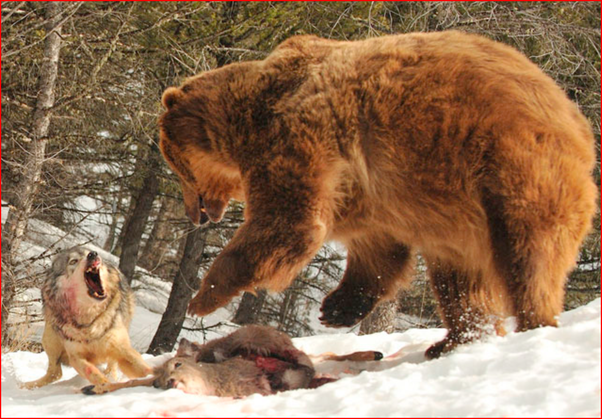 I suppose in a way this DayBreaks is mislabeled. It’s about peace in a way, but more accurately the deceitful appearance of peace when there is none.

At one point during our time in Alaska, a naturalist led a small group I was with out onto the tundra and up onto a  hillock. We ate lunch there (after careful instructions to keep our eyes peeled for bear and not to leave anything behind). When we were sitting there, we watched a mother grizzly and her cub on a sloping hillside opposite us (they were quite a distance away!) We all sat in silence, just watching the majestic animals move.

Then, at one point, our guide said, “Just listen. What can you hear?” To be honest, all I could hear was the sound of the wind on occasion, the sound of my own breathing, the sound of blood rushing through my ears and the occasional bird calling. It was so peaceful and quiet. That started me thinking about the peace that is to be found on the vast slopes and tundra of Alaska.

But that peace is deceptive. That very afternoon, the mother grizzly may have taken down some animal for dinner. The moose cow will vigorously defend her calf with her very sharp and hard hooves – even taking on full grown bears. Wolves will chase caribou for miles in pursuit of a meal and a golden eagle swoops down from on high to snatch an unsuspecting and unwary rabbit or pika. Bull moose fight with one another, sometimes to the death, to gain mating rights with a harem of cows. The wild of Alaska may sound and even look peaceful, but it is deceptive.

The bible warns us: Jeremiah 8:11 (NIV) – They dress the wound of my people as though it were not serious. “Peace, peace,” they say, when there is no peace. In context, God is excoriating the leaders – political and religious – who pretend that nothing is wrong, that there is nothing that threatens harm due to their conceit and greed.

We need to be careful to not be lulled into a lack of alertness for danger surrounds us at every bend, over every hilltop. We have an enemy who doesn’t slack off when we are weak or wounded – he attacks. But he wants us to think the world is just fine, thank you, and that we don’t need to be worried or wage war against a culture that has discarded God’s truth.

We also need to be careful that we are not guilty of emulating those God rails against in Jeremiah and lulling others into a false sense of wellness.

Let us be alert at all times, for the enemy seeks whom he may devour!

PRAYER: Help us be vigilant and not mislead by our own desire for peace when there is none. Give us discernment to recognize false claims that would lull us into comfort! In Jesus’ name, Amen.