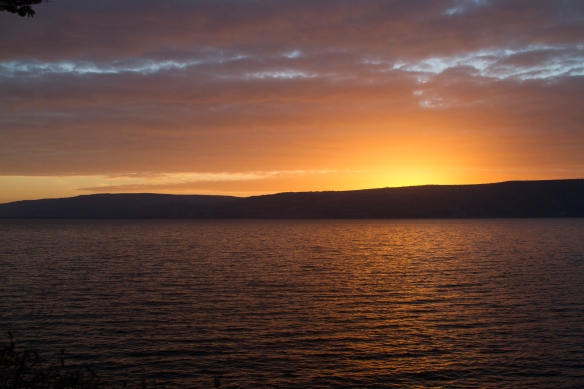 “Grander earth has quaked before

Moved by the sound of His voice

Seas that are shaken and stirred

Can be calmed and broken for my regard…” – It Is Well, Bethel Music (link to YouTube for this song: https://www.youtube.com/watch?v=YNqo4Un2uZI)

It was less than two weeks ago that I found myself on a boat crossing the sea of Galilee. I’d seen it before, but never been on the water. A gentle breeze was blowing and I found myself in thought about what had happened on that body of water 2000 years ago, when a man fell asleep in the back of the boat in the middle of a storm. The waves and wind screamed out in their torment while he slept peacefully.

Those with him feared for their lives – the boat, they would tell him after waking him, was sinking and they would all drown. His reaction was to speak – to tell the wind and sea to be calm – and instantly the storm was over. Why? Because they recognized the voice and name of the One who had made them and to Whose will they were still subject. And at that realization, the fear of the disciples changed from the storm to Whomever this was that was in the boat with them.

You’ve heard the story so many times before. You’ve thought about the implications – about the storm on the sea as an analogy for the storms in our lives and how Jesus calms us. But being on the sea makes it come alive with new meaning.

Yet in hindsight, I can see that even at those moments, He was there. He did hear. And as with the disciples in the boat, He did care. He took action out of regard for the disciples, and he took action for me, too, not just that day He was on the boat with them, but on ALL those days when I so desperately needed Him.

I find myself not as fearful these days after having the luxury of being able to look back over 63 years of life and seeing that He has never once really let me down or let me drown. And now there is a quieter spirit in my soul that believes, ever so slightly more, that He never will fail me or let me down.

Why do I have that comfort? Not because my faith is so much stronger or that I deserve it more or because there are not storms in my life, but because of two things: 1) I have seen His faithfulness, but even more because 2) the wind and the waves still know His name, and they must yield to Him.

Mark 4:37-41 (NLT) – But soon a fierce storm came up. High waves were breaking into the boat, and it began to fill with water. Jesus was sleeping at the back of the boat with his head on a cushion. The disciples woke him up, shouting, “Teacher, don’t you care that we’re going to drown?” When Jesus woke up, he rebuked the wind and said to the water, “Silence! Be still!” Suddenly the wind stopped, and there was a great calm. Then he asked them, “Why are you afraid? Do you still have no faith?” The disciples were absolutely terrified. “Who is this man?” they asked each other. “Even the wind and waves obey him!”

TODAY’S PRAYER:  Jesus, how comforting it is to know that the same winds and seas that knew your voice and authority 2000 years ago still know who you are – and they still obey you instantly. In the shrieking storms that assail our lives, let us take comfort in knowing that everything in heaven and on earth and in all creation MUST yield to your voice when you speak – and that you act and speak on our behalf throughout our entire lifetime. In Jesus’ name, Amen.