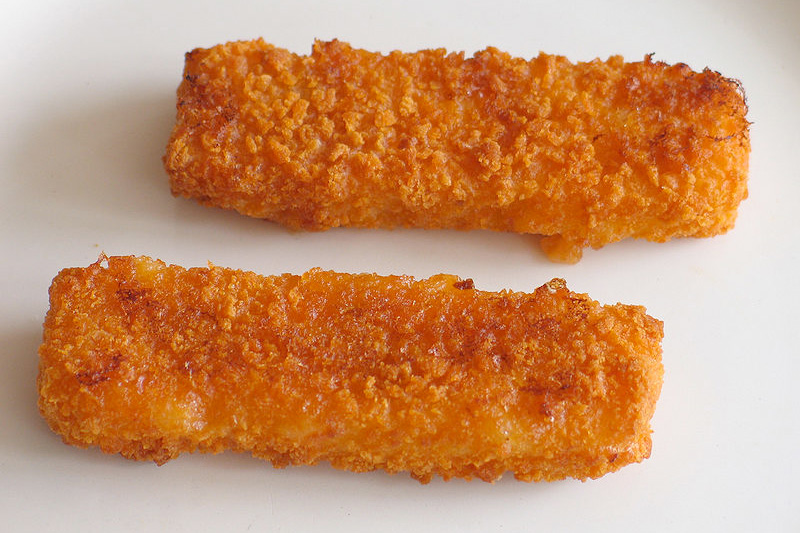 DayBreaks for 9/03/15: How a Fish Stick Changed the World

Then the two from Emmaus told their story of how Jesus had appeared to them as they were walking along the road, and how they had recognized him as he was breaking the bread. And just as they were telling about it, Jesus himself was suddenly standing there among them. “Peace be with you,” he said. But the whole group was startled and frightened, thinking they were seeing a ghost! “Why are you frightened?” he asked. “Why are your hearts filled with doubt? Look at my hands. Look at my feet. You can see that it’s really me. Touch me and make sure that I am not a ghost, because ghosts don’t have bodies, as you see that I do.” As he spoke, he showed them his hands and his feet. Still they stood there in disbelief, filled with joy and wonder. Then he asked them, “Do you have anything here to eat?”  They gave him a piece of broiled fish, and he ate it as they watched. – Luke 24:35-43 (NLT)

Several days had passed since Jesus’ crucifixion and burial. There was no denying what had happened – and no one doubted he had died. The facts were obvious to all who were there. There was no expectation of a joyful reunion on earth. Such things just don’t happen – they didn’t then, and they don’t today.

And so let us be gracious to Jesus’ early followers. When Jesus does appear, there is fear galore, but not the tiniest inkling of faith. They recognized his form, his appearance, but they, like we, would probably make the assumption that a ghost looks like the person they once was (if we can speak of ghosts in such a way.)

So, Jesus asks for something to eat. They hand a him a piece of fish – a fish stick, if you will. And Jesus eats it. As Dave Buckley said in his blog post: “Enter the fish finger! This is the moment. The moment that a fish finger changed everything…As Jesus swallowed that fish finger, suddenly the idea of of him being alive again was easier to swallow too.”

That’s all it took – one fish stick. Their disbelief turned into a faith that would lead them all, save one, to martyrdom. That fish stick changed the world – and it has changed eternity because it turned doubters into absolute believers.

PRAYER: Forgive us doubting humans, Jesus, for seeing and thinking with earthly eyes and minds. Don’t ever let us forget that You are the One who turns things from impossible into reality! In Jesus’ name, Amen.